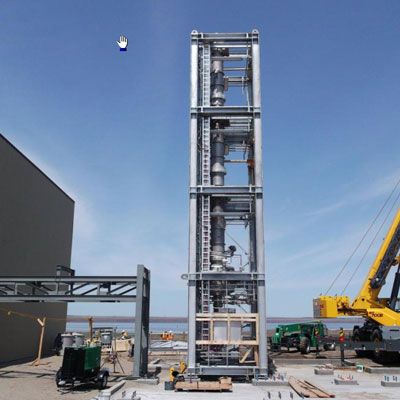 The azeotropic distillation process is referred to the types of technique used for filtering azeotropic. In this process the chemical reactor remains still and for esterification and hydrolysis types of reactions, it is proved to be a useful technique. In this method an additional component is added to make heterogeneous inferior boiling azeotrope. The azeotropic distillation system also puts in the picture that it is the mechanism of involvement of a compound that will form an azeotrope with at least one section of the liquid mixture and which will they separated out as the difference in the volatilities of such components in the mixture. In the ancient time this kind of distillation is used to scorch the mixture of ethanol and water. Now in spite of benzene, other compounds are used like cyclohexane because benzene is believed as a cancer causing substance. It weakens the interactions between molecules and helps in eliminating them. In some cases due to the usage of specific entrainer, the whole process becomes the extractive distillation method. Azeotrope needs different separation process as it contains some materials which cannot be easily separated through normal distillation method. Azeotropic distillation of ethanol is also possible in such type of apparatus. Rufouz Hitek Engineers Pvt. Ltd. is counted as one of the leading Azeotropic Distillation manufacturers.

Our manufactured products are made up of finest quality of raw materials due to which it ensures durability in the product nature. There are mainly three factors in our designed products which are the main keys of our success and these are quality designs, competitive price and timely delivery.

We Have Cover Following Markets:

In our organization there is a team of experts who always inspect the quality of the manufactured products. From start to the last stage of packaging, they give their best efforts to meet the quality standards. Thus we ensure about the durability, energy efficiency and impulsive nature of our delivered products at all times..